Quantum science suggests the existence of many possible futures for each moment of our lives. Each future lies in a state of rest until it is awakened by choices made in the present. 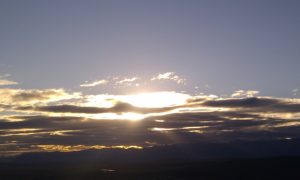 This implies that we create our future from moment to moment with each choice we make. This applies on a personal level but, as quantum science also suggests, the ancient mystics and sages were right. We are all one in ways that we could only imagine.

A new paradigm is emerging. It is a paradigm that requires our full awareness, attention, and active participation within ourselves, with each other and on a collective level. We can no longer afford to live as though our thoughts and acts only affect ourselves and our direct surroundings. As we cannot dump poisonous waste in a country geographically distant from us and think it will not be of any consequence to us, we cannot act maliciously and expect it to have no repercussions.

Of course many of us do not see ourselves as having much of a choice about anything at all. The stage in our lives when we realise we do have choices and we are willing to accept our responsibility for them is what I call growing up. But first we have to grow down.

In our early lives we establish an identity and a set of beliefs and about ourselves and the world through the process of enculturation. On one hand, this belief system enables us to function in our daily lives. We grow down into being an individual in our society/tribe/family. However, the subconscious beliefs and programming we acquire in this process can later inhibit expression of other aspects of our selves. Dismantling the limiting aspects of enculturation forms a large part of the therapy process. We can begin to discard beliefs that no longer serve our well being.

Themes emerge as we examine the fabric of our lives. Those recurrent themes are the stuff of which my clients, and I myself at times, are inclined to say “oh not that again!” However I believe we can see these long term themes as part of a ‘calling’. There is a life path which asks to be lived through us and fulfilled. Relationship difficulties, physical symptoms and the dreams can show us this path, a way to becoming truly ourselves. Arnold Mindell, a Jungian analyst and physicist, discovered that physical symptoms showed up in symbolic form in dreams, often long before they manifested on a physical level. As he explored this phenomenon further he realised that the kinds of patterns he was seeing were like a hologram. In other words the same information that is present in dreams and symptoms is also present in, for instance, relationship difficulties. He noticed that often people have a vivid dream in their early childhood or a dream which recurred and which they have not forgotten. And that this dream has particular significance.

When approached with curiosity and compassion, being able to work with body experiences such as symptoms, especially chronic ones, allows us to sense this force behind them and access the information they offer us.

My client’s struggle to say no to her cocaine- addicted boyfriend’s demands for sex  turned up in her dreams before it manifested as a ‘no’ in her body in the form of severe thrush. My own fascination with dreams increased greatly after my encounter with a potentially fatal form of cancer and the dreams that warned me of it. Since then I have worked with many clients and workshop participants on discovering the patterns or larger story behind their lives. To do this we have to let go of our need for rational mechanistic explanations. This is often particularly difficult in relation to intransigent chronic symptoms or life threatening illnesses.

A participant  in a short seminar I was giving for colleagues told about a recurrent childhood dream which he still occasionally had, in which he is pursued by a creature which is covered with slime and smells dreadful. The seminar was about to finish and we had no time to go into the dream deeply so I followed a hunch and asked him if he was inclined to be ‘too nice’ for his own good. He stared at me in amazement and nodded. The dream of being pursued is a very common one. Perhaps you could say that we are being pursued by our fate.

Even our outward appearance is connected to our life myth. Especially where there is something unusual about it. I recall a man in one of my workshops. He was very tall and quite broad. But his presence was not one of a big man. The reason became apparent when we worked in the group. His childhood dream was of being on a beach and suddenly seeing that there was a tidal wave about to sweep him away. He started running. Outrunning a tidal wave is not an easy thing to do. But the dream would end before he was engulfed. When we played out his dream with him as the wave (this took some encouragement) and me as him the change in his demeanour was quite astonishing. This man had never really identified with his bigness. In this case he experienced himself as small in relation to his mother. His process was to be as big as he was.

So if we all have a ‘destiny’ or life path that must be fulfilled, where does that leave us in relation to responsibility and choice? Discovering our life myth, rather than giving a sense of restriction and fate, grants us a sense of purpose and meaning. And we have the choice to take responsibility for the life path we are on. The large man, having worked with his dream has a choice to live his bigness, or to feel dominated by his mother for the rest of his life.

Becoming conscious requires stamina and courage. At some stage in the increasing of awareness, we also have to give up the blame game. It seems that we cannot even blame our genes any more. Because, however firmly rooted it still is in popular culture, the notion that the characteristics of our fifty trillion celled human bodies are produced by blueprints in our DNA is crumbling. Recent research in the field of epigenetics is beginning to show that the biochemical environment in which a cell exists has a profound effect on which genes are activated. And the energy environment has an even more rapid effect than the chemical one on gene function. When someone has a sudden shift of belief it can radically change the epigenetics, which means that the same genetic code will now be interpreted completely differently. There is speculation that this may be the phenomenon behind so-called miracle cures. Perhaps we can see the life myth as the equivalent of the genes and how the genes are expressed is determined by various environmental factors including consciousness.

Fortunately more and more of humanity are waking up to our potential as co-creators in our destiny and that of our planet. And if we consider that our individual subconscious cultural perceptions are actually shared beliefs and are therefore invisible to others too perhaps we can forgive others and break the chain of wrongdoing and revenge which is handed down from one generation to another.

All you need is love?

That how we feel in our everyday lives directly affects others has been clearly demonstrated by research at the Institute for Heartmath. When subjects focus their attention on the heart and activate a core heart feeling such as love, caring, or appreciation their heartbeat shifts into a more coherent pattern. Increasing this coherence of heart rhythm activates a cascade of neural and biochemical events that affect nearly every organ in the body. By focussing attention on the heart the synchronisation between heart and brain is increased calming our nervous system and deactivating   the stress response.

The heart’s electromagnetic activity is 5,000 times more powerful than the electromagnetic field of the brain. Current technology can read the heart’s energy field up to ten feet away from the body. And when an individual connects with another person through physical touch or simply by caring, the electrical activity of the two communicating hearts and brains become entangled and entrained with each other. With the higher coherence level exerting more influence.

So perhaps shifting global consciousness from instability and discord to balance and co-operation is something that really is within our reach. In these times of huge change and planetary crisis it is vital that we all realise our role as co- creators of our future.

The Biology of Belief – Bruce Lipton

Anatomy of the Spirit – Caroline Myss